Spring Batch is the Spring Project aimed to write Java Batch applications by using the foundations of Spring Framework.

Michael T. Minella, project lead of Spring Batch and also a member of the JSR 352 (Batch Applications for the Java Platform) expert group, wrote in his book Pro Spring Batch the next definition “Batch processing […] is defined as the processing of data without interaction or interruption. Once started, a batch process runs to some form of completion without any intervention“.

Typically Batch Jobs are long-running, non-interactive and process large volumes of data, more than fits in memory or a single transaction. Thus they usually run outside office hours and include logic for handling errors and restarting if necessary.

Spring Batch provides, among others, the next features: 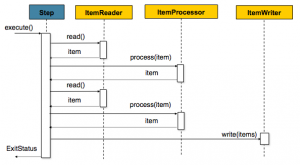 The JobLauncher interface has a basic implementation SimpleJobLauncher whose only required dependency is a JobRepository, in order to obtain an execution, so that you can use it for executing the Job. 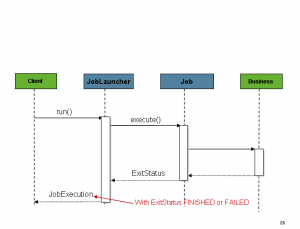 You can also launch a Job asynchronously by configuring a TaskExecutor. You can also this configuration for running Jobs from within a Web Container. 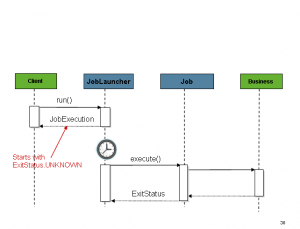 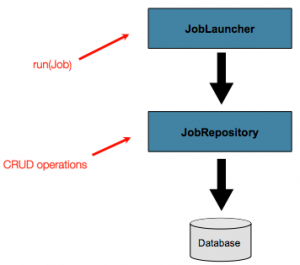 The main concepts related with Job execution are

Now we are going to see a simple sample application that reads a POJO that represents a Person from a file containing People data and after processing each of them, that is just uppercase its attributes, saving them in a database.

All the code is available at GitHub.

Then, let’s see the simple processor, PersonItemProcessor. It implements an ItemProcessor, with a Person both as Input and Output.

It provides a method to be overwritten, process, that allows you to write the custom transformation.

Once done this, we can proceed to configure the Spring Batch Application, for doing so, we’ll use Java Annotations in a BatchConfiguration file:

Highlights for this class are:

This configuration is almost everything needed to configure a Batch process as defined in the concepts above.

Actually, only one configuration class needs to have the @EnableBatchProcessing annotation in order to have the base configuration for building batch jobs. Then you can define the job with their steps and the readers/processors/writers that they need.

But an additional data source is needed to be used by the JobRepository. For this sample we’ll use an in-memory one:

In this case we’ll use the same in-memory database, HSQL, with the schema for the application (line 9) and the schema for the job repository (line 10). The former is available as a resource of the application, the file called schema-all.sql, and the latter in the spring-batch-core jar (spring-batch-core-3.0.1.RELEASE.jar at the time of this writing)

The official documentation shows an slightly different configuration by using the @Autowired annotation for the beans that @EnableBatchProcessing will create. Use the one that you like most. In this case they also imports the data base configuration.

We chose another approach: we load it when configuring the application in the main method as you’ll see shortly. besides, we imported an additional batch configuration (see line 28 at BatchConfiguration.java) to provide an alternate way to launch the application.

Enable Batch Processing: how it works

As we said before, we will go a little deeper in how the annotation @EnableBatchProcessing works.

To remind its goal, this annotation provides a base configuration for building batch jobs by creating a list of beans available to be autowired. An extract of the source code gives us a lot of information:

As you can see at line 4, this annotation imports an implementation of an ImportSelector, one of the options to import beans in a configuration class, in particular, to selective import beans according to certain criteria.

This particular implementation, BatchConfigurationSelector, instantiates the expected beans for providing common structure for enabling and using Spring Batch based in the EnableBatchProcessing’s attribute modular.

There are two implementations depending on whether you want the configuration to be modularized into multiple application contexts so that they don’t interfere with each other with the naming and the uniqueness of beans (for instance, beans named reader) or not. They are ModularBatchConfiguration and SimpleBatchConfiguration respectively. Mainly they both do the same, but the former using an AutomaticJobRegistrar which is responsible for creating separate ApplicationContexts for register isolated jobs that are later accesible via the JobRegistry, and the latter just creates the main components as lazy proxies that only initialize when a method is called (in order to prevent configuration cycles)

The default implementation, DefaultBatchConfigurer, provides the beans mentioned above (jobRepository, jobLauncher, jobRegistry, transactionManager, jobBuilders and stepBuilders), for doing so it doesn’t require a dataSource, it’s Autowired with required to false, so it will use a Map based JobRepository if its dataSource is null, but you have take care if you have a dataSource eligible for autowiring that doesn’t contain the expected database schema for the job repository: the batch process will fail in this case.

Spring Boot provides another implementation, BasicBatchConfigurer, but this is out of the scope of this entry.

With all this information, we already have a Spring Batch application configured, and we more or less know how this configuration is achieved using Java.

We have all we need to launch a batch job, the Job to be launched and a JobLauncher, so wait no more and execute this main class: MainJobLauncher.

First things first. This is the way I like to write main classes. Some people from Spring are used to writing main classes annotated with @Configuration, but I’d rather to annotate them as @Components in order to separate the actual application and its configuration from the classes that test the functionality.

As Spring component (line 1), it only needs to have the dependencies @Autowired.

As a main class, it creates the Spring Application Context (line 12), it gets the component as a Spring bean (line 14) and then it uses its methods (or attributes in this example. Line 16)

Let’s back to the Batch application: the line 16 is the call to the JobLauncher that will run the Spring Batch process.

The remaining lines are intended to show the results, both from the job execution and the results in the database.

CommandLineJobRunner is a main class provided by Spring Batch as the primary entry point to launch a Spring Batch Job.

It has a JobLauncher attribute that is autowired with the application context via its AutowireCapableBeanFactory exposed, that is used to autowire the bean properties by type.

You can declare this main class in the manifest file, directly or using some maven plugin as maven-jar-plugin, maven-shade-plugin or even exec-maven-plugin.

That is, you can invoke from your command line something like this:

To simplify, I’ll also copy the generated jar to the same directory of the dependencies in order to invoke the java command more easily:

That’s all for now.

Since this entry is becoming very large, I’ll explain other ways to run Spring Batch Jobs in a next post.