Yes, I love trivial things in my computers as terminal appearance, desktop backgrounds (from time to time I look for wallpapers at Wallbase.cc) and some programs as Rainmeter or Fences (on Windows) 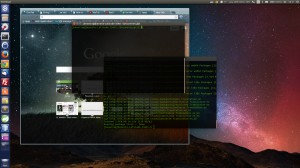 Terminal kermit-green and black on Ubuntu

But now let’s see what tools I want to have installed in any computer I use for my daily work as Java EE developer, regardless the particular project.

As a side note, I alternate Operating Systems whenever I can. Windows is the prefered for most of the companies. I like Ubuntu and I love my Mac Book Pro, so I make the effort of using all of them. Besides, it allows me to test if my applications are really WORA.

I also have to mention Google and stackoverflow, nowadays I can’t imagine to work without them.

And what about application servers? Since I want to title the POST “10 tools…” they fall from the list. But to talk about a little bit of them, in each project I have to use the application server in which the application will be deployed, but I always use Tomcat for local tests. For anything beyond servlets and JSPs I use open source projects (ActiveMQ if I need JMS, for instance). There is always a targeted server in development environment, so I’ve never used GlassFish or TomEE, but I want to try WildFly.