Hadoop is an open source framework for distributed fault-tolerant data storage and batch processing. It allows you to write applications for processing really huge data sets across clusters of computers using simple programming model with linear scalability on commodity hardware. Commodity hardware means cheaper hardware than the dedicated servers that are sold by many vendors. Linear scalability means that you have only to add more machines (nodes) to the Hadoop cluster.

The key concept for Hadoop is move-code-to-data, that is, data is distributed across the nodes of the Hadoop cluster and the applications (the jar files) are later sent to that nodes instead of vice versa (as in Java EE where applications are centralized in a application server and the data is collected to it over the network) in order to process the data locally.

At its core, Hadoop has two parts:

As you can see in the very definition of the Apache Hadoop website (what is Apache Hadoop?), Hadoop offers as a third component Hadoop MapReduce, a batch-based, distributed computing framework modeled after Google’s paper on MapReduce. It allows you to parallelize work over a large amount of raw data by splitting the input dataset into independent chunks which are processed by the map tasks (initial ingestion and transformation) in parallel, whose outputs are sorted and then passed to the reduce tasks (aggregation or summarization).

In the previous version of Hadoop (Hadoop 1), the implementation of MapReduce was based on a master JobTracker, for resource management and job scheduling/monitoring, and per-node slaves called TaskTracker to launch/teardown tasks. But it had scalability problems, specially when you wanted very large clusters (more than 4,000 nodes).

So, MapReduce has undergone a complete overhaul and now is called MapReduce 2.0 (MRv2), but it is not a part by itself, currently, MapReduce is a YARN-based system. That’s the reason why we can say that Hadoop has two main parts: HDFS and YARN.

Besides the two core technologies, the distributed file system (HDFS) and Map Reduce (MR), there are a lot of projects that expand Hadoop with additional useful technologies, in such a way that we can consider all of them an ecosystem around Hadoop.

Next, a list of some of these projects, organized by some kind of categories:

To install Hadoop on a single machine to try it out, just download the compressed file for the desired version and unpack it on the filesystem.

There is some required software for running Apache Hadoop:

To get a Hadoop distribution, download a recent stable release from one of the Apache Download Mirrors.

There are several directories, for the current, last stable, last v1 stable version and so on. Basically, you’ll download a tar gzipped file named hadoop-x.y.z.tar.gz, for instance: hadoop-2.6.0.tar.gz.

You can unpack it wherever you want and then point the PATH to that directory. For example:

Now you can verify the installation by typing hadoop version:

In standalone mode, there is no further action to take, the default properties are enough and there are no daemons to run.

In pseudodistributed mode, you have to set up your computer as described at Hadoop MapReduce Next Generation – Setting up a Single Node Cluster. But let’s review the steps needed.

You need at least a minimum configuration with four files in HADOOP_HOME/etc/hadoop/:

fs.defaultFS replaces the deprecated fs.default.name whose default value is file://

dfs.replicationis the default block replication, unless other is specified at creation time. The default value is 3, but we use 1 because we have only one node.

Other useful values are:

dfs.datanode.data.dir, local path for storing blocks by the DN (defaults to file://${hadoop.tmp.dir}/dfs/data)

Other useful values are:

yarn.resourcemanager.hostname, the host name of the Resource Manager.

yarn.nodemanager.aux-services, list of auxiliary services executed by the Node Manager. The value mapreduce_shuffle is for the Suffle/Sort in MapReduce that is an auxilary service in Hadoop 2.x.

Pseudodistributed mode is like fully distributed mode with a single host: localhost. In order to start the daemons on the set of hosts in the cluster, SSH is used. So we’ll configure SSH to log in without password.

Remember that you need to have SSH installed and a server running. On Ubuntu, try this if you need so:

Now create a SSH key with an empty passprhase

Finally, test if you can connect without a pasword by trying:

Before using HDFS for the first time, some steps must be performed:

To start the HDFS, YARN, and MapReduce daemons, type:

You can check what processes are running with the Java’s jps command:

Once it’s over, you can stop the daemons with:

You can create a home directory for a user with the next command:

There are another way to get installed Hadoop, that is, using companies that provide products that include Apache Hadoop or some kind of derivatives:

The HDFS filesystem designed for distributed storage of very large files (hundreds of megabytes, gigabytes, or terabytes in size) and distributed processing using commodity hardware. It is a hierarchical UNIX-like file system, but internally it splits large files into blocks (with size from 32MB to 128MB, being 64MB the default), in order to perform a distribution and a replication of these blocks among the nodes of the Hadoop cluster.The applications that use HDFS usually write data once and read data many times.

The HDFS has two types of nodes:

There is also a node poorly named Secondary NameNode that is not a failover node nor a backup node, it periodically merges the namespace image with the edit log to prevent the edit log from becoming too large. Thus, the best name for it is Checkpoint Node.

Once you have installed Hadoop, you can interact with HDFS, as well as other file systems that Hadoop supports (local filesystem, HFTP FS, S3 FS, and others), using the command line. The FS shell is invoked by:

Provided to you have hadoop in the PATH as we saw above.

You can find a list of available commands at File System Shell.

Hadoop is mainly written in Java, being the core class for HDFS the abstract class org.apache.hadoop.fs.FileSystem, that represents a filesystem in Hadoop. The several concrete subclasses provide implementations from local filesystem (fs.LocalFileSystem) to HDFS (hdfs.DistributedFileSystem), or Amazon S3 (fs.s3native.NativeS3FileSystem) and many more (read-only HTTP, FTP server, …)

Reading data using the Java API involves to obtain the abstract FileSystem via one of the factory methods (get()), or the convenient method for retrieving the local filesystem (getLocal()):

And then obtain an input stream for a file (that can be later be closed):

With these methods on hand, the flow of the data in HDFS will be the next: 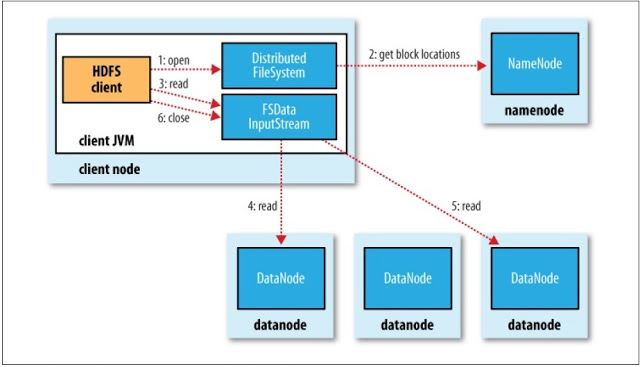 The Java API allows you to create files with create methods (that, by the way, also create any parent directories of the file that don’t already exist). The API also includes a Progressable interface to be notified of the process of the data being written to the datanodes. It’s also possible to append data to an existing file, but this functionality is optional (S3 doesn’t support it from the time being)

The output stream will be used for writing the data. Furthermore, the FSDataOutputStream can inform of the current position in the file.

The flow of the data written to HDFS with these methods is the next: 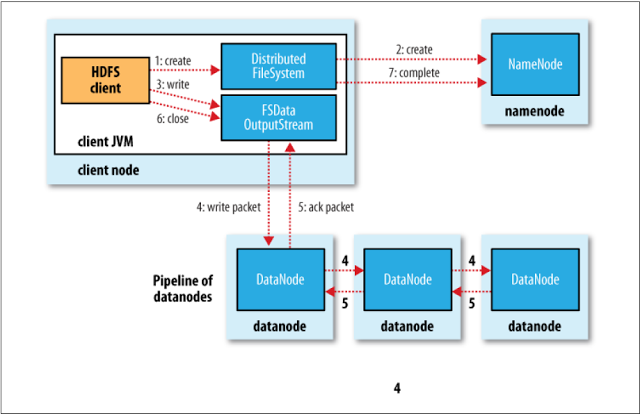 Apache YARN (Yet Another Resource Negotiator)

YARN is Hadoop’s cluster resource management system. It provides provides APIs for requesting and working with cluster resources to be used not by user code, but for higher level APIs, like MapReduce v2, Spark, Tez…

YARN separates resource management and job scheduling/monitoring into separate daemons. In Hadoop 1.x these two functions were performed by the JobScheduler, that implies a bottleneck for scaling the Hadoop nodes in the cluster.

There are five major component types in a YARN cluster:

Anatomy of a YARN Request

These are the steps involved in the submission of a job to the YARN framework.

This process applies for each client that submits jobs. In the picture above there are two clients (the red one and the blue one)

MapReduce is a paradigm for data processing that uses two key phases:

For writing a MapReduce program in Java for running it in Hadoop you need to provide a Mapper class, a Reducer class, and a driver program to run a job.

Let’s begin with the Mapper class, it will separate each word with a count of 1:

Highlights here are the parameters of the Mapper class, in this case:

As you can see, instead of using Java types, it’s better to use Hadoop basic types that are optimized for network serialization (available in the org.apache.hadoop.io package)

The basic approach is to override the map() method and make use of the key and value input parameters, as well as the instance of a Context to write the output to: the words with its count (one, for the moment being)

Let’s continue with the Reducer class.

The intermediate result from the Mapper will be partitioned by MapReduce in such a way that the same reducer will receive all output records containing the same key. MapReduce will also sort all the map output keys and will call each reducer only once for each output key along with a list of all the output values for this key.

Thus, to write a Mapper class, you override the method reduce that has as parameters the only key, the list of values as an iterable and an instance of the Context to write the final result to.

In our case, the reducer will sum the count that each words carry (always one) and it will write the result to the context.

Finally, the Driver class, the class that runs the MapReduce job.

First, create a Hadoop Configuration (the default values are enough for this example) and use the GenericOptionsParser class to parse only the generic Hadoop arguments.

To configure, submit and control the execution of the job, as well as to monitor its progress, use a Job object. Take care of configuring it (via its set() methods) before submitting the job or an IllegalStateException will be thrown.

In a Hadoop cluster, the JAR package will be distributed around the cluster, to allow Hadoop to locate this JAR we pass a class in the Job ’s setJarByClass() method.

Next, we specify the input and output paths by calling the static addInputPath() (or setInputPaths) method on FileInputFormat() (with a file, directory or file pattern) and the static setOutputPath() method on FileOutputFormat (with a non-existing directory, in order to avoid data loss from another job) respectively.

Then, the job is configured with the Mapper class and the Reducer class.

There is no need for specifying the map output types because they are the same than the ones produced by the Reducer class, but we need to indicate the output types for the reduce function.

Finally, the waitForCompletion() method on Job submits the job and waits for it to finish. The argument is a flag for verbosity in the generated output. The return value indicates success (true) or failure (false). We use it for the the program’s exit code (0 or 1).

The source code is available at github. You can download it, go to the directory and just run the next commands:

And you can take a look to the result using:

Regarding this example, I have to mention a couple of things: